We’re profiling cool kids doing cool things.
Know someone you think should be profiled on our site?
Email us at [email protected] and tell us what makes them so awesome.

That’s what happened to Albertan teenager Joseph Lee when he entered a contest to draw his “dream car” earlier this year.

Joseph was the finalist in a worldwide competition to draw a car that would make the world a better place.

The competition, called the Toyota Dream Car Contest, is sponsored by the car manufacturer Toyota and has been held every year since 2004.

This year, Joseph became the top finalist in Canada in his age category for 12 to 15-year-olds. He competed against 531,692 entries from 78 countries.

After becoming a top finalist worldwide, he received a $3,000 check on Aug. 5 to put towards his post-secondary education.

“Cars and trains were my favorite thing to draw when I was young, but this is my first time ever painting one,” said Joseph in an interview with CBC Kids News.

Joseph Lee holds up the winning picture he made for the Toyota Dream Car Contest. (Image submitted by Joseph Lee)

“My art tutor suggested that I enter the contest. I thought, ‘I have nothing to lose if I lose, but it would be nice if I win,’ so I just kind of did it.”

In his drawing titled Surgery on the RoadJoseph depicts a team of medics operating on a patient inside a futuristic vehicle as a fiery car crash is seen in the distance. 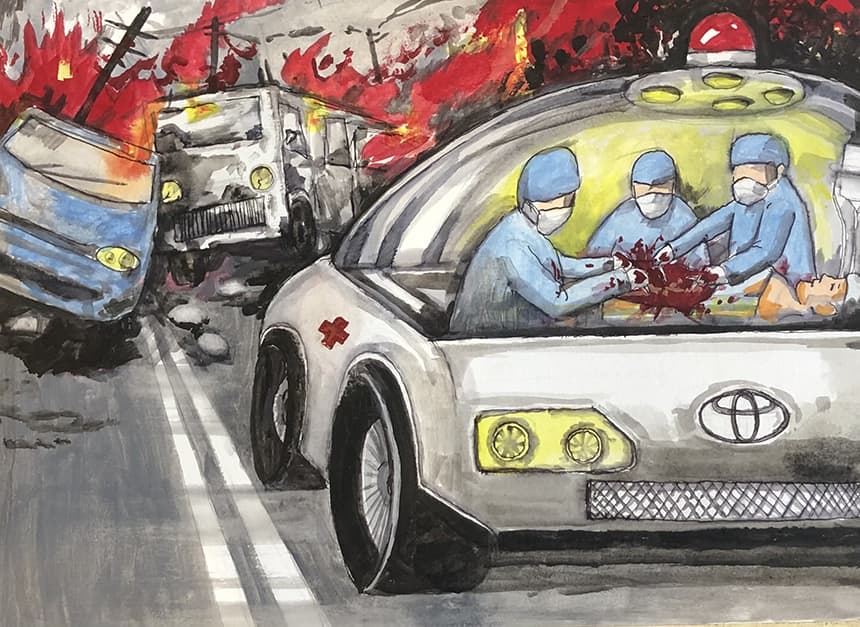 Joseph’s drawing used a combination of watercolor paints and black pen ink, which he melted into the painting to make the gray sky seem smokier. (Image submitted by Joseph Lee)

“What’s fun about drawing is that you don’t really have to connect it to reality,” said Joseph.

Although Joseph loves to draw, his dream is to become a surgeon, which his painting reflects.

Joseph’s hometown of Airdrie doesn’t have a hospital, but it does have an urgent care center for patients.

If a situation is critical, ambulances have to take patients to the nearest hospital in Calgary, which is a 30-minute drive away.

“A lot of people can lose their lives on the way there,” he said. “So I thought, why not have surgery in a car?”

“I just wanted to show that I have great expectations for the future.” -Joseph Lee

To make his drawing, Joseph used a combination of watercolor paints and melted pen ink to make the smoke more dramatic.

For the dramatic lines and colors in the drawing, he took inspiration from the Dutch post-impressionist painter Vincent van Gogh. 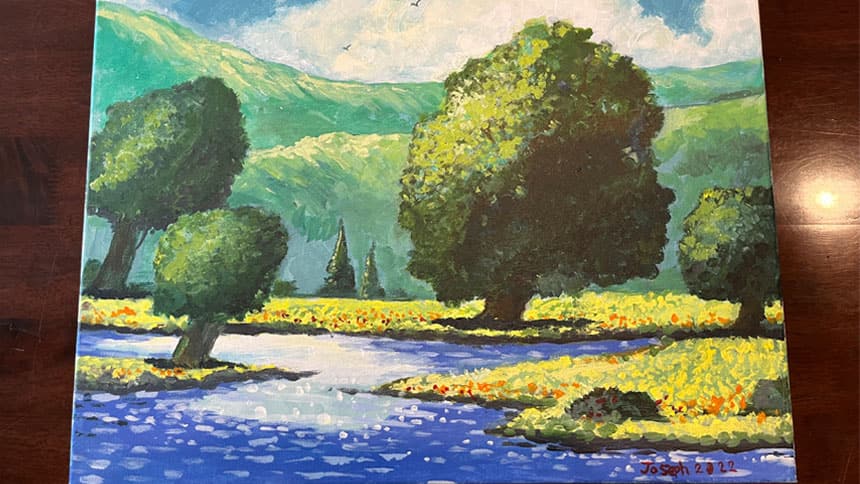 Another example of one of Joseph’s paintings. (Image submitted by Joseph Lee)

The response from the judges

Founded in 2004, the Toyota Dream Car Contest invites youth to share their ideas about the future of mobility.

“What this contest demonstrates is that young Canadians are both thoughtful about the world and the role technology and vehicles play in it,” Brian Sheppard, a judge for the contest, said in a news release.

As an artist, Joseph said he thought carefully about those themes.

“I just wanted to show that I have great expectations for the future,” said Joseph.

﻿﻿Have more questions?﻿Want to tell us how we’re doing? Use the “send us feedback” link below. ⬇️⬇️⬇️