PICTURED: The most memorable cartoons from Queen Elizabeth’s reign by Mail on Sunday’s legendary sketch artist Mac – including the ones she loved most

By Mail on Sunday Reporter

Legendary Mail on Sunday cartoonist Mac has been sketching the Royal Family for decades, below are some of his most memorable, including one loved by the Queen herself of her corgis…

February 1996: The Queen once told Mail cartoonist Mac she loved seeing her corgis in his sketches. She liked this one, about precautions after an anthrax scare, so much she acquired the original

November 2000: A photographer caught the Queen wringing an injured pheasant’s neck with her bare hands at a shoot in Sandringham to end its suffering – but activists called it cruel 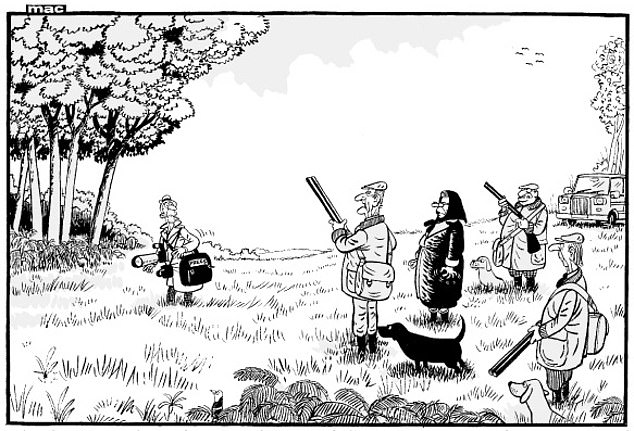 Don’t worry! You’ve got five seconds’ start and if it’s not a clean shot my wife wrings your neck’

November 2001: The Queen and Prince Philip visit the set of BBC soap EastEnders, popping into the Queen Vic. Perhaps some Cockney slang rubbed off on the old Runner Bean 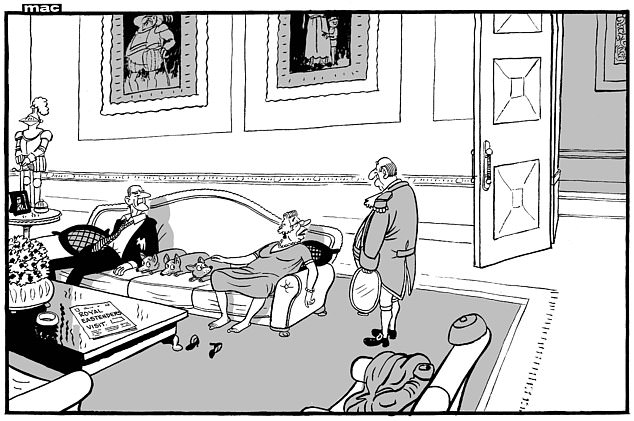 “Stone me. Benskin. We’ve been goin’ round the bleedin’ TV studios all day and we’re knackered. Pour us a couple of pints and ‘have one yourself.”

April 2003: After Harry Potter author JK Rowling’s £280 million fortune put her above the Queen on the Sunday Times Rich List, Mac imagines the Monarch having a wizard idea to catch up 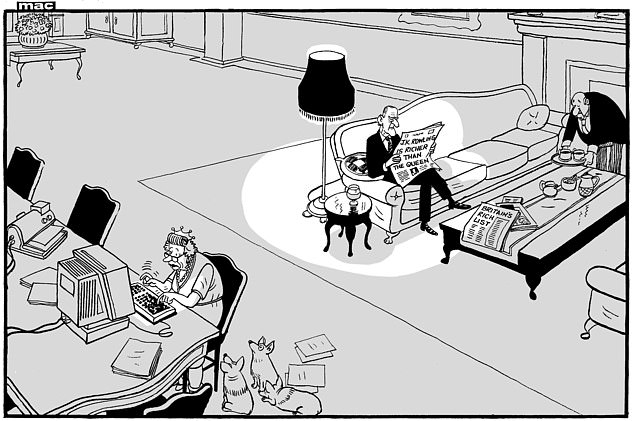 “…. Aha. Cried Harry Windsor, Stubbing out his fag and climbing on to his chauffer driven broomstick ….”

May 2004: After a man got into Windsor Castle by disguising himself as a senior Scotland Yard officer, what other lengths might would-be intruders go to in order to hound Her Majesty? 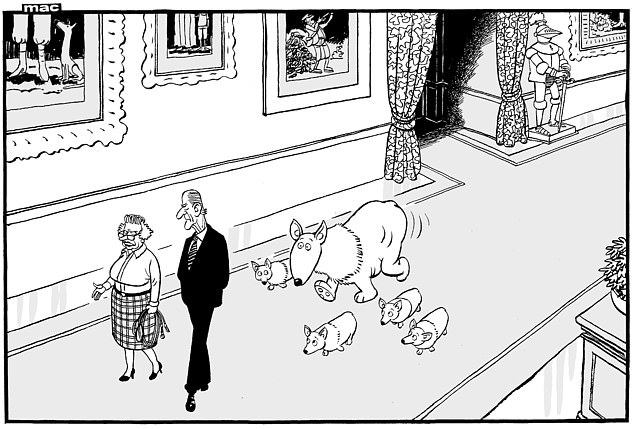 ‘Have a word with security, Phillip. On Monday somebody got within yards of me pretending to be a policeman.’

April 2006: The Royal Mail was overwhelmed with royal mail when the Queen received more than 20,000 cards for her 80th birthday. The thousands of emails would have been easier to deal with 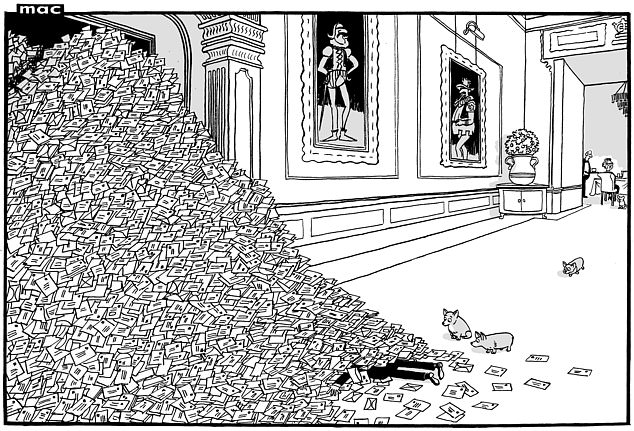 ‘If that’s the post, Philip dear; will you see if there are any cards for me?’

June 2010: The Queen’s bid for an increase to her Civil List funding from the Government is rejected by Chancellor George Osborne, requiring some drastic measures to balance the royal finances 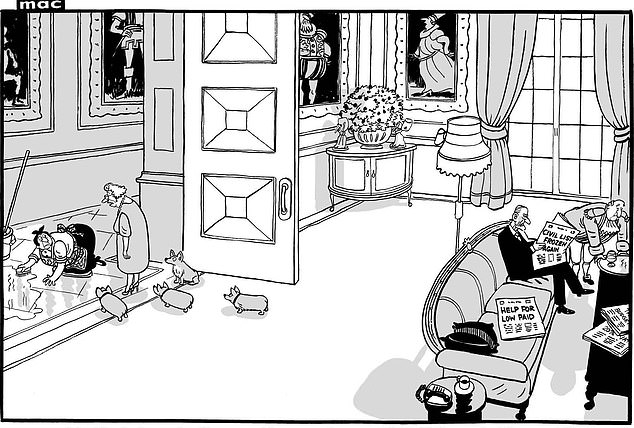 ‘Mrs Figgis. I wonder if you could spare a few pounds until the end of next week?’

December 2010: After two engagements in the family – Zara Phillips to Mike Tindall, and Prince William to Kate – the Queen would be forgiven for wanting a quieter social life 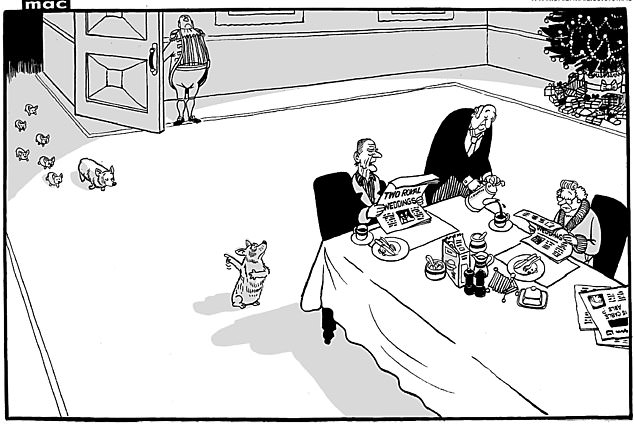 ‘Two’s enough for one year. I hope no one else is going to spring any surprises.’

October 2014: Helen Mirren – who won an Oscar for playing the Queen – is named as the new face of L’Oreal. But in signing the actress, could the cosmetics giant also bag a regal understudy? 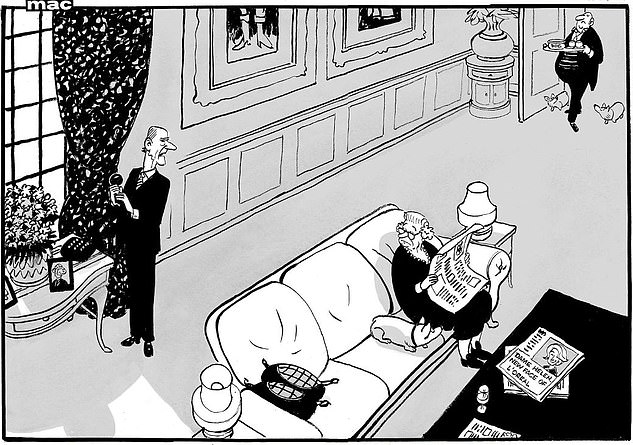 ‘Helen Mirren has got a chill. Are you free for a photo shoot session tomorrow?’

August 2017: Buckingham Palace had confirmed that, at 95, the Duke of Edinburgh would be retiring from royal engagements, giving him much more free time to do the things he loved 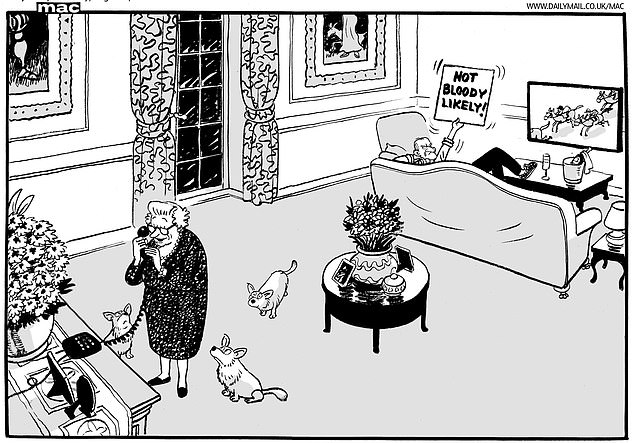 ‘Of course, Kate. Now that he’s retired completely I’m sure he’d love to babysit a few days a week. I’ll ask him.’

November 2017: Mac imagines some confusion as Prince Harry announces his engagement to Meghan Markle – although, with hindsight, maybe Prince Philip did hear the name correctly… 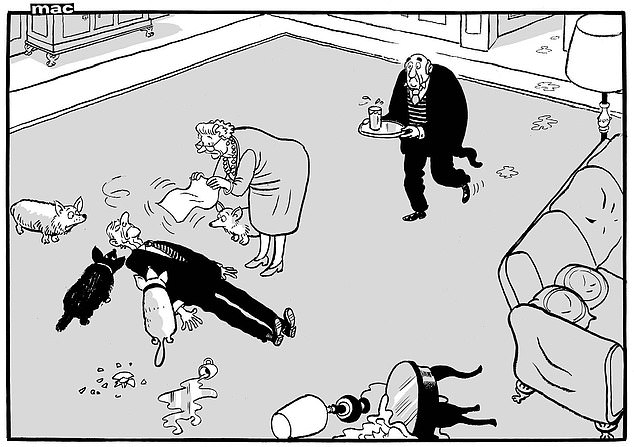 June 2022: The Queen’s surprise appearance in a heart-warming TV sketch with Paddington Bear was a highlight of the Platinum Jubilee celebrations, overshadowing some loyal companions 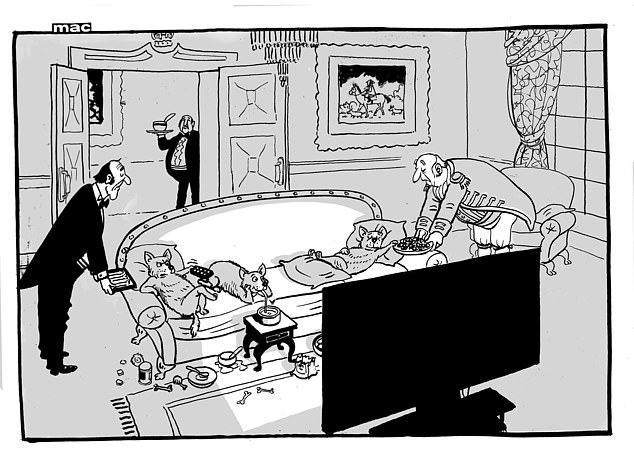 ‘Now we know why we’ve been left alone and neglected. She’s been cavorting with Paddington b***** Bear!’